The complex restoration path has revealed useful elements to reconstruct the original internal modulation of the ecclesiastical building. The architect Emanuele Fidone and the art historian Marco Rosario Nobile (influential voice of the project), have speculated, through the structure of the outer walls and the discovery of three major keystones, an articulation of the nave to three large square spans with cross vaults, communicating on the right side with the lateral chapels. In one of the keystones there is the representation of St. Bernardino of Siena, who seems to bear the date 1525. Today little remains of the interior decoration. A significant discovery, made during the restoration, is that concerning the admirable fresco of the Madonna surrounded by saints in prayer, attributable to the early stages of construction and placed in the chapel to the left of the nave for those who enter. The restoration after the earthquake of 1613 date back to the first decades of the seventeenth century, made at the behest of Count Giovanni Alfonso Enriquez. It is learned in fact that in 1625 the Enriquez family visited the complex and the count, faithful to the will of their ancestors, bestowed a large sum for the recon- struction. The actions were immediate and, as mentioned by Carrafa, the date 1625 is engraved in some archivolts. The earthquake of 1693 was certainly the most catastrophic, but the lack of historical and archival information did not allow reconstructing the details of the damage that the building underwent. In eighteenth-century rebuilding the nave was radically transformed according to the tastes of the Baroque style, that prevailed in the island: the longitudinal openings that gave access to the ancient chapels were stopped up to give space to new altars and access to the chapels was made viable through a corridor, that still today passes through them transversely. The new configuration of the nave involved for first the scanning of the longitudinal walls with altars and paired Corinthian pilasters, second the transformation of the straight chorus that became semi-circular, then the construction of a endonarthex to support the choir and a new roof with a light barrel vault with lunettes. A restoration project for the recovery of the complex, long abandoned, was only launched in 1990, with the creation of new coverings for the side chapels and the basilica room of the church. In 2005, was carried out the restoration of the church and the recovery of the cloister.

The only two elements of the old late Gothic structure, preserved in time, are the façade and the cloister. Of singular beauty and workmanship, the facade, refers the beginning of the sixteenth century, is characterized by ogival splayed portal and a magnificent decoration of plant and animal elements, noble shields and iconographies that refer to the Order of Minor Friars. Two elegant single-light windows of Moorish style, different from each other, stand out symmetrically on either side of the count’s coat of arms, now no longer legible. On the stringcourse, there is a rose window, now reduced to oculus, and ultimately, the contemporary to the facade, resists the solid bell tower on the left side of the prospectus.

The same ornamental elegance is found in the cloister with a double set of arches dating back to the first decades of the sixteenth century that refers to the Arab-Norman style. The first set is marked by monolithic columns of limestone all different, drums and capitals are finely decorated and given back its original beauty despite the profound alteration due to the prison needs. The cover shows a modulation of square spans with a cross vault. Octagonal pillars and a wooden roof characterize the second set. 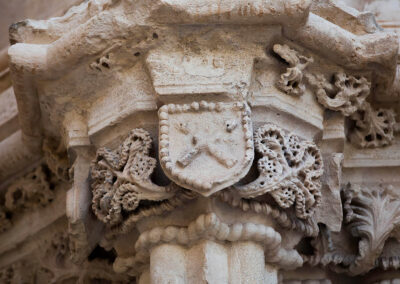 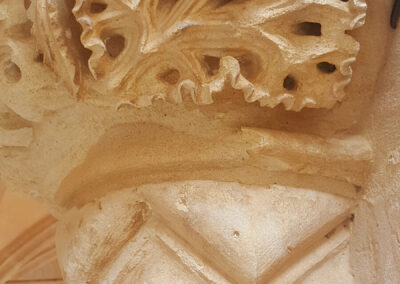 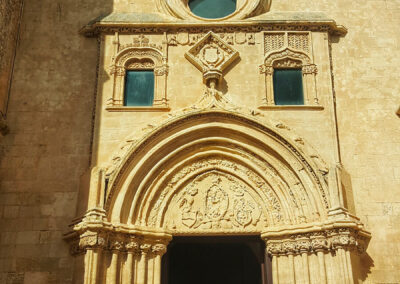 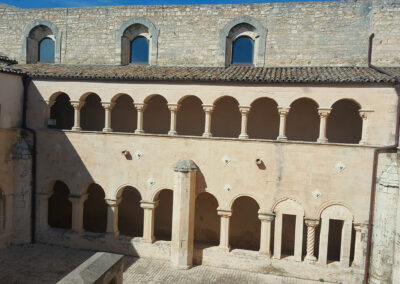 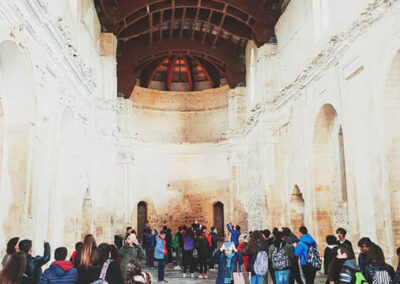 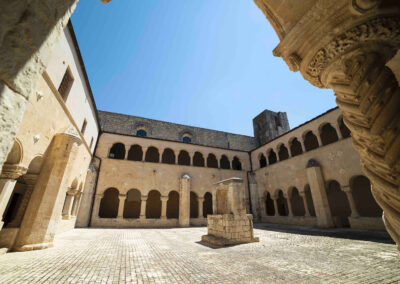 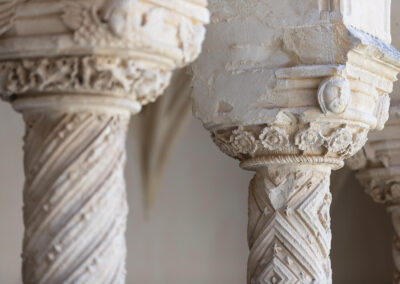 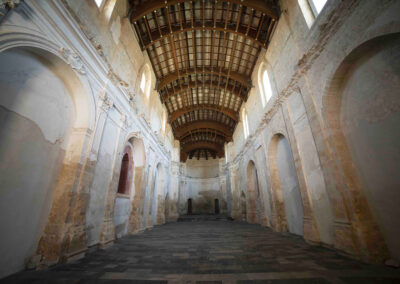 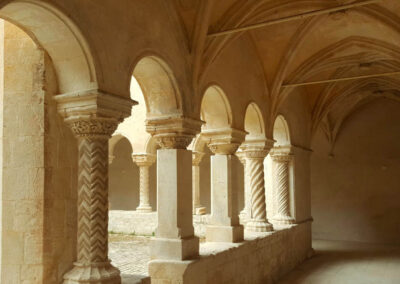